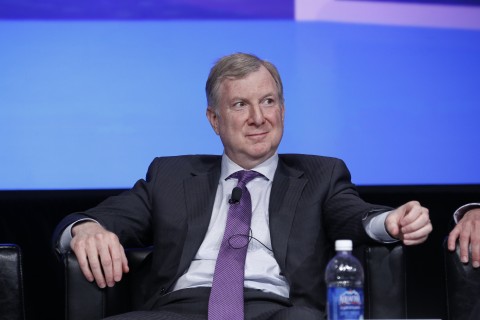 After a quarter-century with Rogers Communications, Ken Engelhart has hung out his own shingle.

Engelhart had been the leader of Rogers’ regulatory team for many years under vice-chairman Phil Lind but given all of the changes the company is undergoing (including the re-jigging of the regulatory leadership direction under new chief corporate officer Jacob Glick who is now overseeing regulatory, public affairs, policy, government relations and communications), Engelhart (pictured at last year’s Canadian Telecom Summit) decided now is the time to try something new. He left Rogers last month.

“I’ve set up my own law practice,” he told Cartt.ca in a recent interview. “I haven’t set up the web site yet, I haven’t gotten my business cards printed up yet, but I actually have a couple of clients (and have) been doing a bit of work… One of the people who phoned me up was not anyone I would ever have expected, so I think part of the fun of it is just new people with interesting problems that I can help with. I think it will be very energizing.”

Engelhart’s 25-year run at Rogers – especially when founder Ted Rogers was at the controls – was pretty energetic as the company grew from a 3,000-employee cable company with a small broadcasting division and tiny wireless investment to the largest wireless company in Canada with a still-substantial cable and broadband division and important broadcasting and media group with more than 26,000 employees.

“The most fun thing for me and the things I remember the most is working with Ted Rogers. How many people get that privilege in their lifetime? He was larger than life. He was brilliant – and I got to work with him one-on-one in a lot of projects. That was a lot of fun and pretty exciting.”

How true are the stories though, of how challenging it was to work for Ted – especially reporting directly to him sometimes? “He yelled at me a lot – and sometimes some of the things he said could be quite cutting and personal,” Engelhart recalled, with a smile on his face. “He always used to say we were like a family at Rogers, and we were. It was sort of like if your father was yelling at you and telling you how you messed up; you knew he was mad, but you knew that he wanted you to succeed and you knew that he was on your side. So, it wasn’t as terrifying as it should have been that the owner of the company was yelling at you.”

And the founder had his soft side, too. “My wife was diagnosed with a serious illness about 15 years ago and the first thing Ted said to me was ‘why don’t you take her down to Mayo Clinic. She can go on the company jet, I’ll pay for everything.’ Now, as it happened she had a great doctor here in Toronto, and he was able to help her, but when people do things like that for you, it really is a family.”

The company, due mostly to the colossal – and colossally complicated – changes going on globally in the media, telecom and broadband spaces, is now undergoing many modifications under new CEO Guy Laurence. “Some change was definitely needed,” said Engelhart, “and we’ll have to see if they’re the right changes as it all plays out.” He added there’s no truth to the rumour that he left Rogers because the company’s headquarters will soon undergo renovations removing all of the offices in the place. “I’m not sure old-timers like me are going to love being in an open space. But no, that wasn’t the reason,” he laughed.

What Engelhart says he is most looking forward to now is helping people with those aforementioned “interesting problems” without having to worry about shoehorning every solution he finds into the Rogers Communications narrative, especially since the coming transformations in the business will seriously challenge the big, established incumbents with stiff headwinds.

For example: “I think we’ve got a whole generation of young people, the millennials, who aren’t subscribing to cable TV and I don’t think they ever will. Some people think when they get families they will. I’m not sure about that,” he added.

Looking at the potential disruptors on the wireless side, Engelhart pointed to Google’s Project Fi as a scary potential alternative to incumbents for consumers. “I see that as a real threat to the wireless industry,” he said. “Maybe it won’t replace the wireless industry, but it’s a real headwind – and I say that because while we call them mobile phones, most people use them sitting down, so WiFi, which is more and more ubiquitous, works quite well. Then if you’ve got the ability to switch to an MVNO when you are in your car, out of a WiFi zone, that can be a hugely disruptive service if you’re a wireless company.

“The world used to be sort of a simple place 25 years ago,” he continued. “You had monopolies and you had people who wanted to compete and the Regulator had to figure it all out. Now, you have competition in every sector, but it’s not 10 competitors, it’s two or three or four – and just like with airlines, somehow we feel that two or three is not enough… and that creates consumer discontent and politicians and regulators respond. I don’t see that going away.

“There’s going to be this constant consumer focus from politicians and regulators and that’s going make things challenging for people in the industry.” – Engelhart

“I don’t see us returning to an era where that’s not happening, so there’s going to be this constant consumer focus from politicians and regulators and that’s going make things challenging for people in the industry.”

Engelhart says when it comes to the Regulator, he tries to remember the way Ted coached his people to deal with the Commission and its decisions. “Ted’s philosophy always was you have to meet the regulator halfway. You can’t say no to the Regulator because they’re the Regulator. Compromise, figure out something that will work. It’s not what you want, but maybe you can make it work for your business.

“Sometimes, privately, Ted could be quite angry with some regulatory decisions.  But he never let on publicly. He always believed that you should be statesman-like and accept the fact that whether you agree or not, they believe they’re acting in the public interest and you have you help them do that.”